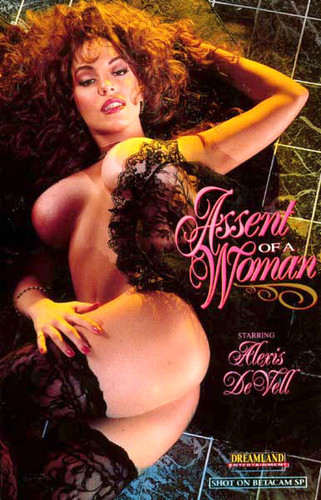 The producers of this one probably meant to call it ‘Ascent of a Woman,’ since it’s about a woman climbing the ladder of political success. But if they could spell very well, they probably wouldn’t be working cooking up names of porno flicks, I guess. Be that as it may, this 1993 video stars Alexis DeVell as a woman who’s running for mayor against crooked politico Tom Byron. She appears in a topless photo in the local newspaper and wins a landmark election, driving Byron into retirement. The whole thing is extremely silly, and fairly convoluted with a cast that includes Skye Blue and Tracy West and campaign workers caught up in a lesbian love affair, Steven St. Croix as a hunky gardener, Lacy Rose and Serenity as busty maids, and Joey Silvera as someone’s out-of-town beau. Highlights include Byron’s desktop romp with secretary Brittany O’Connell, in which both performers really lose themselves in the action. DeVell delves into some nice work herself, matched up with Silvera in a gripping grind. And Lacy Rose shows off her nasty side when paired up with St. Croix in a torrid tussle. A nice plot-driven piece of hardcore, filled with plenty of pay-for-play passion.