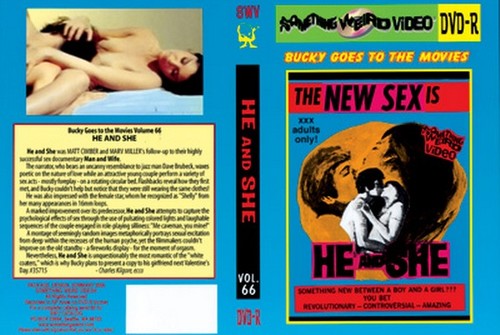 Description: He and She was Matt Cimber and Marv Miller’s follow-up to their highly successful sex documentary Man and Wife.
The narrator, who bears an uncanny resemblance to jazz man Dave Brubeck, waxes poetic on the nature of love while an attractive young couple perform a variety of sex acts – mostly foreplay – on a rotating circular bed. Flashbacks reveal how they first met, and Bucky couldn’t help but notice that they were still wearing the same clothes!
He was also impressed with the female star, whom he recognized as “Shelly” from her many appearances in 16mm loops.
A marked improvement over its predecessor, He and She attempts to capture the psychological effects of sex through the use of pulsating colored lights and laughable sequences of the couple engaged in role-playing silliness: “Me caveman, you mine!”
A montage of seemingly random images metaphorically portrays sexual excitation from deep within the recesses of the human psyche, yet the filmmakers couldn’t improve on the old standby – a fireworks display – for the moment of orgasm.
Nevertheless, He and She is unquestionably the most romantic of the “white coaters,” which is why Bucky plans to present a copy to his girlfriend next Valentine’s Day.