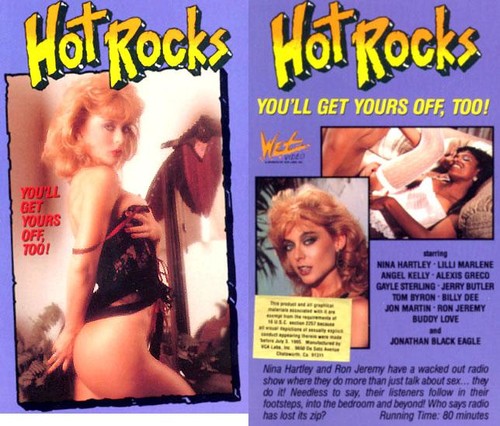 Hot Rocks Description: “This offering features one of the most used plots in all of porndom. It’s the radio station that improves its ratings by turning to sexually charged content. This time out, the station managers decide to really throw caution to the wind and have folks actually have sex right there in the studio, while the whole world is listening. Or at least that portion of the world within a couple of miles of the broadcast tower. Anyway, whatever the story pretends to be about, it’s actually about some of the most enticing and exciting talents of their day doing their utmost to get a rise out of their audience. Nina Hartley shows why she’s considered one of the greatest hardcore talents ever, showing off her amazingly taut and tight figure as she takes on all comers with passion and ardor. Angel Kelly was one of the first black superstars of porn, a breathtakingly scrumptious beauty whose curvalicious good looks provide some of the flick’s best moments. There’s lots of high spirited couplings throughout this one, each one pulled off with an air of fun and fervor that keeps things moving along at a breezy pace. No one takes themselves too seriously and they all seem to be having a great time — one more element that separates this one from most modern endeavors. A great way to get into that old-school spirit.”