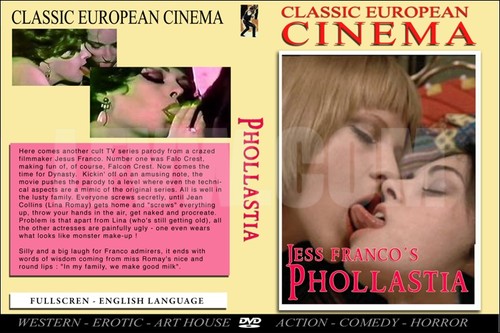 Info:
Here comes another cult TV series parody from a crazed little spanish entertainer called Jesus Franco. Number one was Falo Crest, making fun of, of course, Falcon Crest. Now comes the time for Dynasty.
Kickin’ off on an amusing note, the movie pushes the parody to a level where even the technical aspects are a mimic of the original series. All is well in the lusty family. Everyone screws secretly,until Jean Collins (Lina Romay) gets home and “screws” everything up, throw your hands in the air, get naked and procreate. Problem is that apart from Lina (who’s still getting old), all the other actresses are painfully ugly – one even wears what looks like monster make-up !
Silly and a big laugh for Franco admirers, it ends with words of wisdom coming from miss Romay’s
nice and round lips : “In my family, we make good milk”. Hilarious.