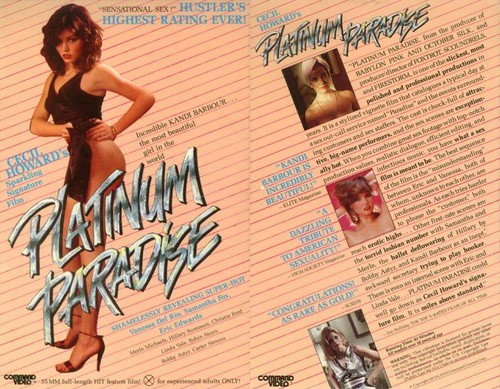 PLATINUM PARADISE, from the producer of BABYLON PINK and OCTOBER SILK, and producer/director of FOXTROT, SCOUNDRELS, and FIRESTORM, is one of the slickest, most polished and professional productions in years. It is a stylized vignette film that catalogues a typical day at a sex out-call service named “Paradise” and the events surrounding customers and sex staffers. The cast is chock-full of attractive, big-name performers, and the sex scenes are exceptionally hot. When you combine great sex footage with top-notch production values, realistic dialogue, efficient editing, and infectious music, you have what a sex film is meant to be. The best sequence of the film is the “misunderstanding” between Eric and Vanessa, both of whom, unknown to each other, are professionals. As each tries harder to please the “customer,” both reach erotic highs. Other first-rate scenes are the torrid lesbian number with Samantha and Merle, the ballet deflowering of Hillary by Bobby Astyr, and Kandi Barbour as an inept, awkward secretary trying to play hooker. There is even an internal scene with Eric and Linda Vale. PLATINUM PARADISE could well go down as Cecil Howards signature film. It is miles above standard.