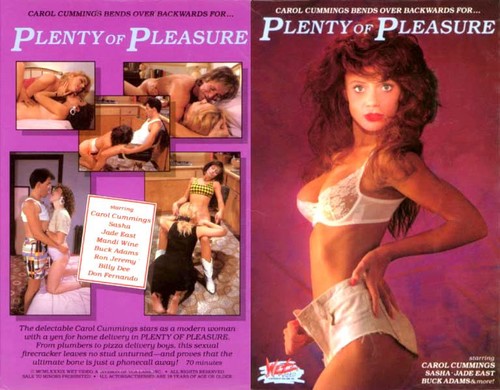 Plenty indeed. There’s really nothing at all uniting these steamy sex scenes, other than the fact that each one presents some tasty 80s tart in all her go-go glory. It’s a compilation video that doesn’t waste any time trying to establish who’s who or what’s what. Simply sit back and enjoy the action. There’s lots to like about this one, starting with a ravenous kitchen encounter between some tasty brunette and her randy paramour. He peels her out of her tight dress and proceeds to ravish her right there on the floor, on the counter and across the dishwasher in a great scene indeed. Jade East shines as the focal point of a frantic fiveway frolic, joining a pair of studs, a delicious blonde and a sweet brunette for some endlessly erotic romping. All three gals give it as good as they get in this first-rate group grope. A curly-haired cutie shares her natural charms with a lucky stiff in another good scene, although you’ll be a bit distracted by the bedroom itself, which is about as typically 80s a set as you could find. Ron Jeremy hooks up with a very delectable redhead in another good scene, while a tight-bodied short-haired blonde strumpet takes on her man in another solid one-on-one scorcher. Fans of 80s-style fun and all-natural women will find plenty of pleasure from start to finish.