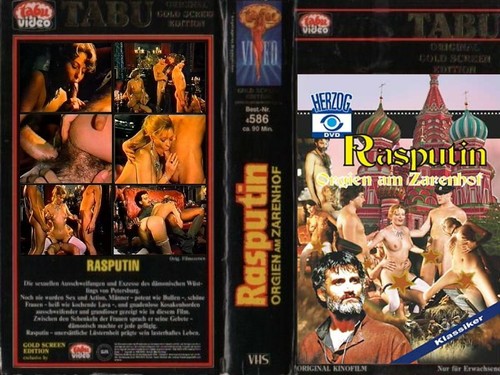 A true curiosity, “Rasputin, Orgien am Zarenhof” was shot in two different versions, as was sometimes common in Europe in the 1970s and 1980s. One was a pretentious drama spiced up with soft-core sex scenes, while the other grafted on scenes of hardcore pornography onto the film and jettisoned much of the plot.
In 1984 we got another view of Rasputin from Germany, this flick in fact give us quite a few different views of Rasputin, some we may not want to see! A big budget porn film, this entry was made in an attempt to compete with Bob Guccione’s Caligula (1979). Rasputin (Alexander Conte) looks a lot like comedian Chris Elliot. Also, he acts as a sort of partisan for the peasants. Whenever a peasant is being whipped or beaten by a cossack, Rasputin pops up and shoots the cossacks down. Furthermore, he goes to the Palace and fucks all the ladies in waiting. He fucks them and blows his load in their faces, John Leslie style! No, I’m not making this up. They don’t just try to kill him once, they try it several times. And at the end of the film he’s still living, running the Palace like it’s his own. The violence is outrageous in this film, whippings, burnings, shootings in the head, you name it, it’s there. And did I mention it runs two fucking hours. I shit you not! Directed by Ernst Hofbauer, this is the most unusual view of the Rasputin story ever told, and is a must for your collection.