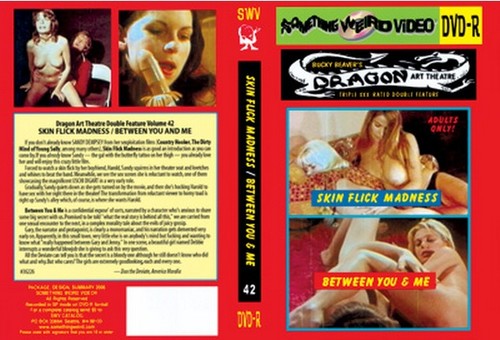 Description: If you don’t already know Sandy Dempsey from her sexploitation films (Country Hooker, The Dirty Mind of Young Sally, among many others), Skin Flick Madness is as good an introduction as you can come by. If you already know Sandy — the gal with the butterfly tattoo on her thigh — you already love her and will enjoy this crazy little film.
Forced to watch a skin flick by her boyfriend, Harold, Sandy squirms in her theater seat and kvetches and whines to beat the band. Meanwhile, we see the sex scenes she is reluctant to watch, one of them showcasing the magnificent USCHI DIGART in a very early role.
Gradually, Sandy quiets down as she gets turned on by the movie, and then she’s hocking Harold to have sex with her right there in the theater! The transformation from reluctant viewer to horny toad is right up Sandy’s alley which, of course, is where she wants Harold.