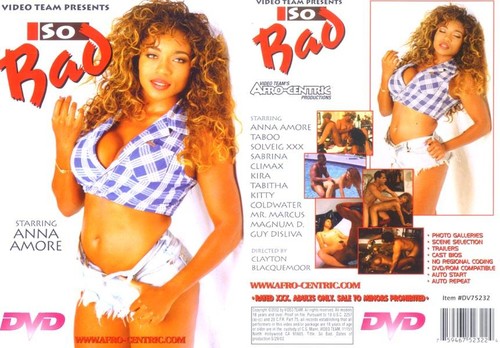 Description: So Bad is the name of a top men’s magazine in this raucous romp, and it seems to be one of the prime venues for nude models around. That’s the only explanation for why such a series of sensual sirens descend on the mag’s headquarters, ready and willing to do whatever and whoever it takes to land a cover shot. It serves up some humor along with massive doses of pure hardcore raunch. Sultry Taboo shines in the opener, joining Mr. Marcus for a quite believably steamy scene. Tasty Solveig hooks up with Kira in a mesmerizing match-up, and then really perks up as Tabitha struts on screen. The light-skinned lovely takes on Marcus in a frantic and fantastic poolside plunge that finds both performers going all-out. It’s a searing scene that ranks with Tabitha’s best ever. Another great scene follows, as luscious Sabrina Gelata loses herself totally in a breathtakingly feverish anal outing with Guy DeSilva. Anna Amore brings out the best in a pair of studs in another steamy scene, and then comes back for more in the finale with Guy. Fans of high-pitched black-themed hardcore will love this one. Outstandingly erotic work from Tabitha and Sabrina Gelata especially make this one a top-notch example of its genre, and a fine choice for virtually any hardcore fan. “Lots of humor, great casting and inspiring sexual situations! Ambitious and arousing!