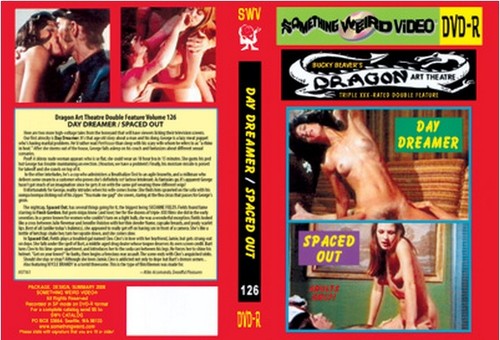 Description: The nightcap, Spaced Out, has several things going for it, the biggest being Suzanne Fields. Fields found fame starring in Flesh Gordon. But porn ninjas know (and love) her for the dozens of triple-XXX films she did in the early seventies. In a genre known for women who couldn’t turn on a light bulb, she was a wonderful exception. Fields looked like a cross between Julie Newmar and Jennifer Aniston with her thin slender frame, cupcake breasts, and pouty scarlet lips. Best of all (unlike today’s bulimics), she appeared to really get off on having sex in front of a camera. She’s like a bottle of ketchup: shake her, turn her upside down, and she comes slow.
In Spaced Out, Fields plays a troubled gal named Cleo. Cleo’s in love with her boyfriend, Jamie, but gets strung-out on dope. She falls under the spell of Burt, a middle-aged drug dealer whose toupee deserves its own screen credit. Burt lures Cleo to his lime-green apartment, and introduces her to the soda can between his legs. He forces her to shine his helmet. “Get on your knees!” he barks, then begins a ferocious rear assault. The scene ends with Cleo’s anguished oinks.
Should she stay or stray? Although she loves Jamie. Cleo is addicted not only to dope but Burl’s demon semen…
Also featuring Mycle Brandy in a torrid threesome. This is the type of film Kleenex was made for.