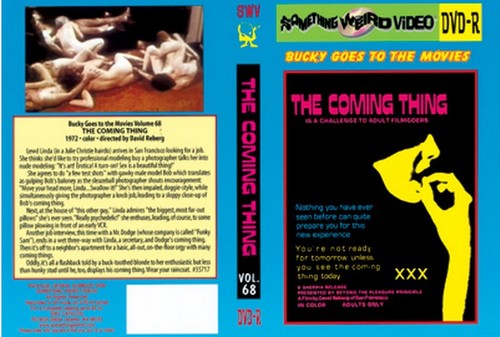 Lewd Linda (in a Julie Christie hairdo) arrives in San Francisco looking for a job. She thinks she’d like to try professional modeling buy a photographer talks her into nude modeling: “It’s art! Erotica! A turn-on! Sex is a beautiful thing!”
She agrees to do “a few test shots” with gawky male model Bob which translates as gulping Bob’s baloney as the sleazeball photographer shouts encouragement: “Move your head more, Linda…Swallow it!” She’s then impaled, doggie-style, while simultaneously giving the photographer a knob job, leading to a sloppy close-up of Bob’s coming thing.

Next, at the house of “this other guy,” Linda admires “the biggest, most far-out pillows” she’s ever seen. “Really psychedelic!” she enthuses, leading, of course, to some pillow plowing in front of an early VCR.

Oddly, it’s all a flashback told by a buck-toothed blonde to her enthusiastic but less than hunky stud until he, too, displays his coming thing.
Wear your raincoat.