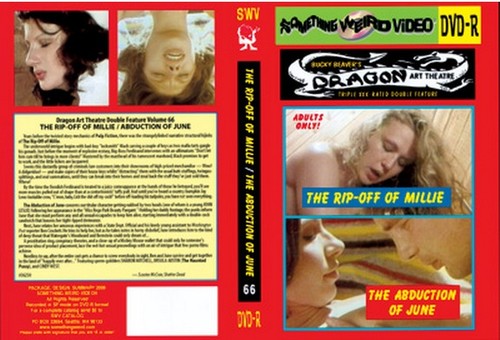 Description: Years before the twisted story mechanics of Pulp Fiction, there was the strangelylinked narrative structural hijinks of The Rip-Off of Millie.
The underworld intrigue begins with bad-boy “locksmith” Mack carving a couple of keys as two mafia tarts gargle his gonads. Just before the moment of explosive ecstasy, Big-Boss Ferdinand intervenes with an ultimatum: “Don’t let him cum till he brings in more clients!” Mastered by the masthead of his tumescent manhood, Mack promises to get to work, and the little lickers are lacquered.
Seems this dastardly group of criminals lure customers into their showrooms of high-priced merchandise — Wow! A didgeridoo! — and make copies of their house keys whilst “distracting” them with the usual butt-stuffings, twingus-splittings, and oral summations, until they can break into their homes and steal back the stuff they’ve just sold them. Whew!
By the time the fiendish Ferdinand is treated to a juicy comeuppance at the hands of those he betrayed, you’ll see more muscles pulled out of shape than at a contortionists’ taffy pull. And until you’ve heard a country bumpkin Jay Lenolookalike crow, “C’mon, baby, Lick the shit off my cock!” before off-loading his tadpoles, you have not seen everything.