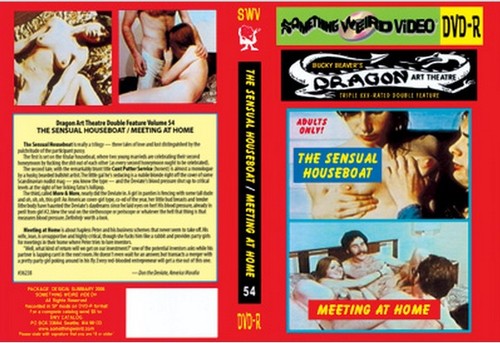 Description: The Sensual Houseboat is really a trilogy — three tales of love and lust distinguished by the pulchritude of the participant pussy.
The first is set on the titular houseboat, where two young marrieds are celebrating their second honeymoon by fucking the shit out of each other (as every second honeymoon ought to be celebrated).
The second tale, with the remarkably blunt title Cunt Putter Service (honest) is almost a monologue by a husky, bearded bullshit artist. The little gal he’s seducing is a nubile blonde right off the cover of some Scandinavian nudist mag — you know the type — and the Deviate’s blood pressure shot up to critical levels at the sight of her licking fatso’s lollipop.
The third, called More & More, nearly did the Deviate in. A girl in panties is fencing with some tall dude and oh, oh, oh, this girl! An American cover-girl type, co-ed of the year, her little bud breasts and tender lithe body have haunted the Deviate’s daydreams since he laid eyes on her! His blood pressure, already in peril from girl #2, blew the seal on the stethoscope or periscope or whatever the hell that thing is that measures blood pressure. Definitely worth a look.