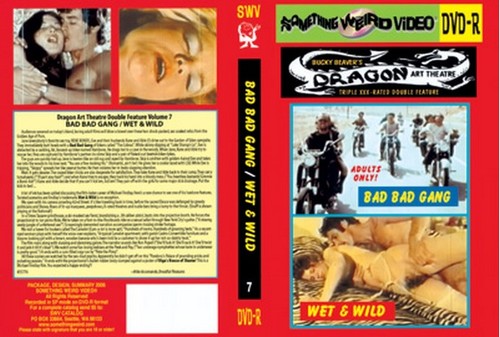 Description: A lot of ink has been spilled discussing the filth-laden career of Michael Findlay. Here’s a rare chance to see one of his hardcore features. Twisted scenarios are Findlay’s trademark. Wet & Wild is no exception.
We open with his camera prowling 42nd Street. It’s like traveling back in time, before the sacred Deuce was defanged by greedy politicians and Disney. Rows of lit-up marquees, peepshows, X-rated theatres and nudie bars bring a lump to the throat. (Snuff is shown playing at the National!) In a Times Square grindhouse, a ski-masked sex fiend, brandishing a .38 caliber pistol, busts into the projection booth. He forces the projectionist to run porno flicks. We’re taken on a foot-to-the-floorboards ride on a sexual safari through New York City’s gutter. (“A steamy, seedy jungle of unfettered sex!”) Screamingly demented narration accompanies sperm-tossing stroke footage.
We visit a haven for hookers called The Camelot (Cum-a-lot is more apt). “Hundreds of rooms. Hundreds of groaning beds.” As a vacant-eyed woman plays with herself the voice-over explains, “A typical Camelot apartment, with garish Castro-Convertible furniture and a bizarre-looking girl with a brown, wooden banana who’s been told by a customer to shove it up her not-so-dainty twat.”
The film roars along with slurping and slamming galore. The narrator sounds like Ron Popeil (“She’ll fuck it! She’ll suck it! She’ll twist it and jerk it till it’s blue!”). We watch some fun-loving lesbians at the Peek and Pay. (“Two underage nymphettes whose taste in underwear is pretty good.”) It ends with a cum-filled orgy run by “Pete the Pimp”.
All these scenes are watched by the sex-mad psycho. Apparently he didn’t get off on this “Pandora’s Palace of pounding pricks and pulsating pussies.” It ends with the projectionist’s bullet-ridden body slumped against a poster of Olga’s House of Shame! This is a Michael Findlay film. You expected a happy ending?!