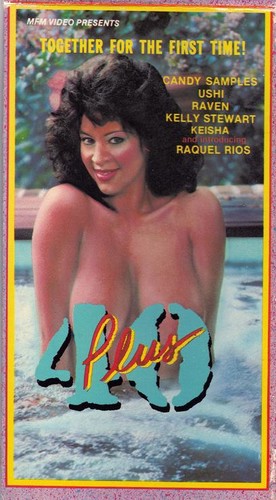 Though issued on DVD by a hardcore label, Alpha Blue Archives, 40 PLUS: THE VIDEO is superior softcore sex spotlighting many top-heavy giantesses of the medium.
Closest to XXX is bookending footage featuring the wonderful Keisha with Blake Palmer, but it is merely strong X (erect penis in action between K’s breasts), no penetration. The rest of the video is short vignettes spotlighting a bevy of beauties in masturbation mode. Principal self-pleasurer is Rachel Wels as a stewardess turned on by her own body.
My favorite was a slowly-paced, big buildup featuring Raven de la Croix, of Russ Meyer fame as a Southern belle on a hot day in May ever so gradually removing her constricting garments. Tease value here is tremendous. Far more explicit is the inevitable pairing of Candy Samples and Uschi Digard (credited on screen as simply “Ushi”) as a mistress and her maid, essential viewing for their legion of fans (after Candy does a solo spot).
Keli Stewart is immensely sexy and even gets some dialog as she teases and comes on to a voyeuristic gardener’s assistant watching her fiddle with her potted plants. As usual, she is worth the price of admission.
My only caveat would be that the video program would have been improved by including some hardcore material. There are many top-heavy actresses of the time, Samples & Keisha included, who went all the way, and it would have added some logical release to the terrific sexual tension created here. You know the saying, all tease and no play…