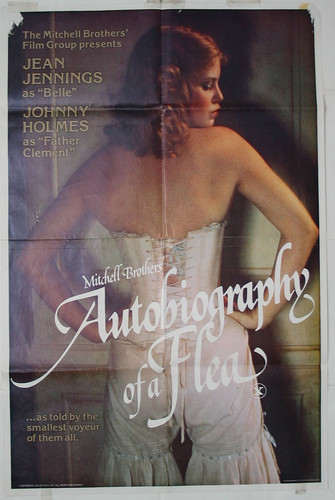 Based on the 19th century novel of the same name, Autobiography of a Flea tells it’s story from the perspective of a flea who lands on a sexually inquisitive but naive orphan girl growing up in sexually repressive Vicotorian era.
Jean Jennings stars as Belle, the main character who follows an arduous path from curious innocent to sexual manipulator. Paul Thomas and John Holmes star as the priests who take advantage of her naivete and shatter her innocence. John Leslie stars as Monsieur Delmont, the man who is in turn victimized and corrupted by Belle. Warren Pierce narrates as the flea.
The book’s anonymous author, critical of catholicism and the sexual hypocrisy of the 19th century society, aimed to show the role society and the church itself played in the creation of deviant behavior. Since it was based on a literary classic, the film itself can stand on its own as a narrative but the sex scenes are integral to the story and the film would not have the same effect without them.
The book was the perfect vehicle for yet another attempt by The Mitchell Brothers to infuse intellectual themes into their films and spur intelligent discussion about the role of sex in society and highlight the value of erotic film in society. The film is an artistic triumph for Sharon McKnight who adapted the screenplay and directed the film to faithfully follow the book.