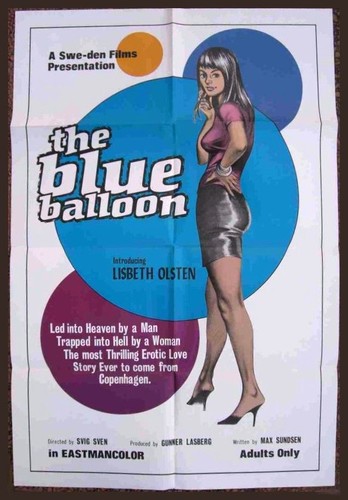 A Danish production of the early 1970s, the film clearly illustrates that Europeans are in no way more “civilized” than garbage-minded Americans. While European soft-core has a reputation for high-gloss and soft-focus, The Blue Balloon proves that Euro-XXX can be as grimy and hard-hitting as our own backstreet variety.

A young couple is seen in a passionate embrace in the middle of a field; they are obviously in love. We learn quickly, however, that they are about to be separated: the young bride (they were recently married) weeps convincingly as her hubby boards a waiting bus. A nefarious looking dyke, obviously a pander who picks up defenseless chicks at the local bus station, approaches the girl, however. She slips the girl a Mickey and spirits her away in a sports car to what appears to be the interior of a garage – with a bed in it. So begins the girl’s nightmarish decent into a life of degradation and prostitution.