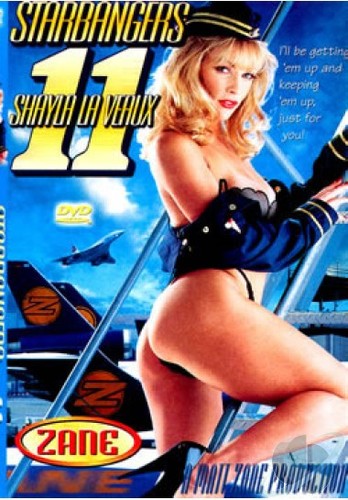 “Saucy Shayla LaVeaux brings down the house — or should we say airport? — in this frantic group groping romp. The set-up for this one is simplicity itself, with Shayla playing the lone stewardess on a flight with seven ready-for-action studs. While the plane is in the air, she’s got to keep things under control, so the pulse-pounding posse has to content themselves with some lip-smacking oral excitement. But when the plane touches down, all the rules go by the wayside. Shayla leads the guys through customs, but a technical snafu soon has them forced to wait it out in the terminal. What’s a group of super-charged sexual high flyers to do? Shayla shows them just what she likes to do as the video escalates into one of the most heated gang-bang features of the year. She’s a porn queen to the bone and turns in one of her most insatiable performances ever in this one. As one piston-packing hunk after another takes their turn at bat, she drives the sequence forward with the sex-mad fervor of a woman far past the sexual point of no return. Extremely hardcore action, with plenty of dazzling double-dipping and wet, wild oral heat makes this one a must-see for fans of Shayla. A pixie-faced hardbody with the soul of a seasoned strumpet, she’s one starlet whose lust for steam is undeniable.”