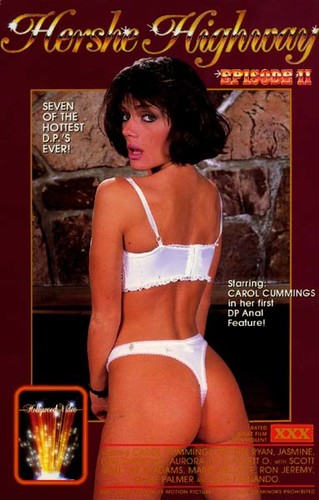 This is one of your nastier little volumes of pornography, packed end to end (pun intended) with graphic back-door screwing starring some of the biz’s healthiest booties. But what’s more, this title specialized in DPs — seven booming’ sequences featuring The Act make this one a seriously kinky collection. Carol Cummings does her first ever on-screen DP here, and the action is blistering and real. Carol is hornier than a she-lynx in heat, and the two-guy penetration seems totally spontaneous (huh?), brought on by Ms. Cummings’ own feverish desire. Rachel Ryan is up next, and works through a series of throbbing O’s as she finds herself sandwiched between two rock-hard stud daddies. Each scene is shot through with healthy doses of pure and authentic libido and then filmed with an emphasis on the two big D’s: Decadence and Depravity. Raunchy, raunchy, very raunchy stuff. mercy.