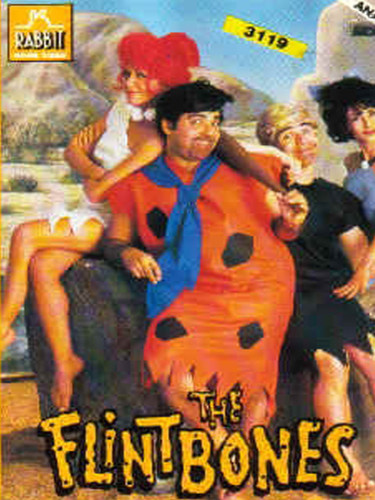 Description: The movie definately reflects the humoristic quality of ron jeremy whom alone has established himself in the industry not only as a man with the endowment of his manhood but with the type of person who he projects to be outside of the studio, a funny man. Watching this film was very eye opening. I had a vivid imagination as a kid always taking the most innocent thing and putting a horrific twist to the outcome, he definately put my image of the “flintstones” into reality, i mean really two married couples doing everything together? yes it was about time they had this type of activity. ranging from the foursome, to the bi experience with willing flintbone(sharon kane), ready rubble(lorrin mick) and brit morgan(great wazoo), this also put a bit of reality into the film from willing and great wazoo sharing the toys, put a genuine look to them enjoying and the surprise of ready rubble (lorrin mick) who seemed to be watching this for the first time whether on or off camera, the cast seemed to share same feelings. all in all these films are hard to find and definately are unique and hard to reproduc