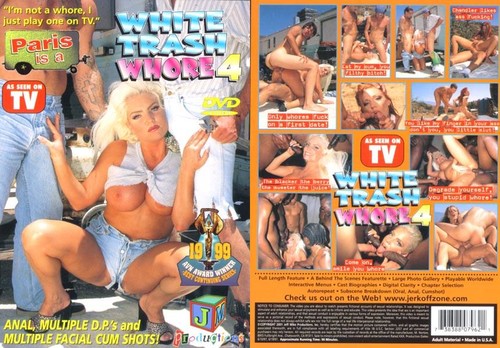 Voluptuous platinum blonde vixen Paris stars in the title role, and she more than lives up to the moniker with some seriously steamy sexual shenanigans. Paris plays a trashy trollop who?s married to David Hardman, but she?s unhappy with her current lot and is determined to make her way to Hollywood. She treats Hardman to a going-away present of herself at her nastiest, taking on him and Jack Hammer in a searing double penetration segment that opens the action. Next we cut away to sexy redhead Chandler Steele, who proves herself to be quite the wanton go-getter as she takes on a pair of studs in another gripping DP scene. Chandler?s growling, moaning antics drive the sequence ever forward with a palpable erotic momentum. Finally, Paris meets up with six well-built black studs who promise to drive her to Hollywood in exchange for some gang banging fun. Well, Paris has no problem with that request and she gladly takes on all comers in a blistering group grope that ranks among the most out-there gang bangs we?ve seen in some time. A nice pick for fans of Paris or anyone who?s into delirious double dipping.