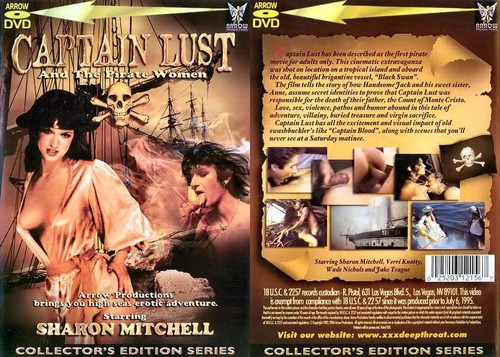 Captain Lust has been described as the first pirate movie for adults only. This cinematic extravaganza was shot on location on a tropical Island and aboard the old, beautiful brigantine vessel, “Black Swan”. The film tells the story of how Handsome Jack (Wade Nichols) and his sweet sister, Anne (Sharon Mitchell), assume secret identities to prove that Captain Lust (Jack Teague) was responsible for the death of their father, the Count of Monte Cristo.
Love, sex, violence, pathos and humor abound in this tale of adventure, villainy, buried treasure and virgin sacrifice. Captain Lust has all the excitement and visual impact of old swashbucklers like “Captain Blood”, along with scenes that you’ll never see at a Saturday matinee.