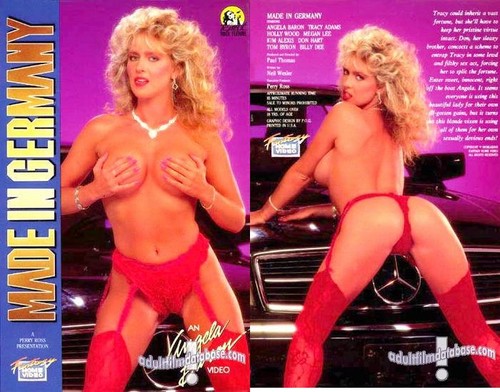 Produced and directed by Paul Thomas

Luscious Teutonic tart Angela Baron stars in this gripping 1987 tale of tutors, trysts and titillation. Angela plays a German teacher who’s just flown in from her native land in order to serve as a language tutor for Tom Byron and Jerry Butler, the children of a recently deceased billionaire. Meanwhile, their sassy sister Tracey Adams stands to inherit all of the cash — but only if she can keep from getting caught in the amorous act by her third brother (Mike Horner). If all of this sounds confusing, don’t worry. The plot quickly takes a backseat to pure passion once Angela steps on the scene. Right off the bat, she turns a tutoring session into a full-throttle threesome, teaching Tom and Jerry a thing or two about pleasing a woman. Something about Angela also entices Tracey into her arms — the two shapely sirens go at it in a sensual Sapphic session that brings them both past the point of no return. Meanwhile, Mike’s plotting his revenge on the rest of the brood — when he’s not dilly-dallying with scrumptious hitchhikers like Holly Wood, that is! In the end, Angela gets control of the family’s fortune and their libidos, giving each of them just what they yearn for. A fun, wickedly wanton romp through the lives of the rich and lascivious.