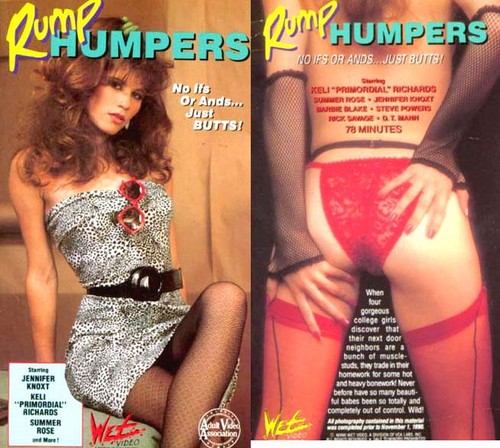 “In this scintillating sexvid, a trio of hot-to-trot coeds move into a house near campus. When they discover that the house next door is populated by a bunch of studly young hunks, the girls decide to put aside their chores and get down to doing what they do best. The whole thing’s very silly, but the sex is sparkling throughout. Kelli Richards turns in one of her finest performances ever in this one, bookending the video with a pair of blistering romps. She starts the flick by taking on some Latino stud in a steamy, highly sensual tryst that leaves them both utterly spent. Kelli returns for the grand finale, joining a pair of well-equipped studs for a fireside frolic that builds to a shattering double penetration conclusion. In between, there’s plenty of passion for those who enjoy 80s-style gals, with their poofed-up hair and all-natural figures. Summer Rose delivers a torrid kitchen encounter with some lucky stiff, delving into some heated back door boffing before all is said and done. And Jennifer Noxt shines in her scene, taking on the Latino guy in a feverish outdoor blast. All in all, this one’s a solid choice for those who crave back door action and don’t mind a bit too much make-up and hair spray in their porn. A fun-filled, sexy romp.”