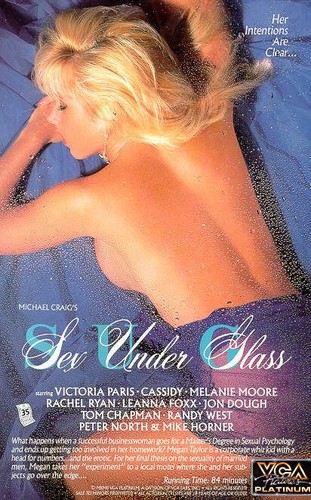 This movie borrows ideas from the mainstream film “Sex, Lies & Videotape”. It features one of the top names in adult films, Victoria Paris.
Paris plays a woman with a lot on her plate. She’s a businesswoman, a wife (married to Peter North) and a part-time college student who is involved in a research project on human sexuality. This involves observing tapes of couples making love. Victoria finds that watching all this filmed sex has brought out a voyeuristic side of her nature, and she spends more and more time alone, watching and fantasizing. Soon she’s making excuses to her husband about working late and asking friends to cover for her at work.
Things really start to get out of hand when, to further her research, Victoria rents adjoining rooms at a cheap motel, setting up one room as a surveillance center for the other. She then observes couples as they check in at night and make love. Typical of the customers is Randy West, whose wife is not satisfying him so he comes here with a prostitute, played by Leanna Foxxx. Leanna doesn’t look like the kind of girl you’d find on the street, however.
Deeper and deeper Victoria gets into her fantasies, and it is having a major negative impact on her life. She finds it increasingly difficult to explain her constant absences to her boss and her husband. As the film draws to a close everything she has worked for in her life in threatened by these uncontrollable desires she has.