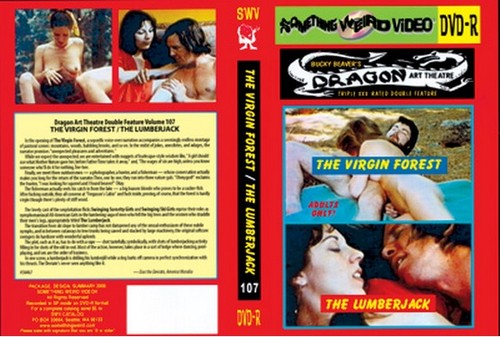 Description: In the opening of The Virgin Forest, a soporific voice-over narration accompanies a seemingly endless montage of pastoral scenes: mountains, woods, babbling brooks, and so on. In the midst of jokes, anecdotes, and adages, the narrator promises “unexpected pleasures and adventures.”
While we expect the unexpected, we are entertained with nuggets of burlesque-style wisdom like, “A girl should use what Mother Nature gave her, before Father Time takes it away,” and, “The wages of sin are high, unless you know someone who’ll do it for nothing. Tee-hee.
Finally, we meet three outdoorsmen — a photographer, a hunter, and a fisherman — whose conversation actually makes you long for the return of the narrator. Then, one by one, they run into three nature gals. “Ohmygod!” exclaims the hunter, “I was looking for squirrel and I found beaver!” Okay.
The fisherman actually reels his catch in from the lake — a big buxom blonde who proves to be a sucker-fish.
After fucking outside, they all convene at “Ferguson’s Cabin” and fuck inside, proving, of course, that the forest is hardly virgin though there’s plenty of stiff wood.