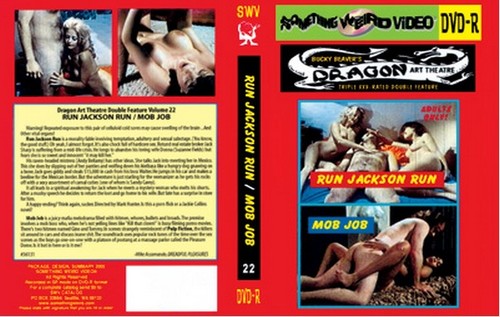 Description: Run Jackson Run is a morality fable involving temptation, adultery and sexual sabotage. (You know, the good stuff.) Oh yeah, I almost forgot. It’s also chock full of hardcore sex. Rotund real estate broker Jack Sharp is suffering from a mid-life crisis. He longs to abandon his loving wife Donna (Suzanne Fields) but fears she is so sweet and innocent “it may kill her.”
His raven-headed mistress (Andy Bellamy) has other ideas. She talks Jack into meeting her in Mexico. This she does by slipping out of her panties and wolfing down his kielbasa like a hungry dog gnawing on a bone. Jack goes giddy and steals $15,000 in cash from his boss Walter. He jumps in his car and makes a beeline for the Mexican border. But the adventure is just starling for the womanizer as he gets his rocks off with a sexy assortment of carnal cuties (one of whome is Sandy Carey).
It all leads to a spiritual awakening for Jack when he meets a mystery woman who melts his shorts. After a mushy speech he decides to return the loot and go home to his wife. But fate has a surprise in store for him.
A happy ending? Think again, sucker. Directed by Mark Hunter. Is this a porn flick or a Jackie Collins novel?