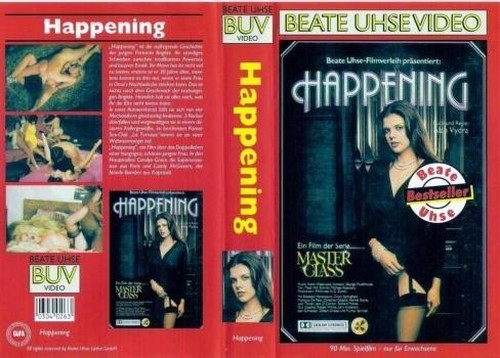 Carolyn Grace has an older husband who insists she wear very old-fashioned night clothes and is obviously unexciting in bed. She has lots of fantasies, triggered by chance events and encounters.
Walking past a handsome stranger (Gabriel Pontello) in a night-time Paris street, she fantasizes about returning with him to his apartment for sex.
In a restaurant with her husband she eyes up the black waiter and day dreams of a blonde customer (XNK0559, or is it a blonde friend of hers) having sex with him.
Seeing the cook (Laura Clair) greeting her boyfriend (Andre Kay, I think) when he arrives on his motorbike, she fantasizes about Laura having sex with him in the stables. She has a conversation with the cook and later finds the cook masturbating in the attic. Then she goes to see an older blonde (XNK0560) who arranges for a man to have sex with her. The older blonde watches, but, unimpressed by the performance, she has to take over (abrupt cut).
Carolyn then has a g/g session with the cook who then takes her to some sort of sex club where Mika Barthel is sitting at the bar. Mika is approached by Guy Royer and immediately gets him to go down on her. Nearby, and watched closely by Jacques Gatteau, Nicole Segaud is giving head to Richard Lemieuvre who is dressed as an Arab. A mature-ish brunette (XNK0561) then does a strip in front of the rest of the patrons (who include Hubert Geral) and an orgy develops, but Carolyn remains aloof and soon leaves alone.
Sitting alone against a gravestone in a churchyard, Carolyn daydreams of going down into the crypt and finding three men there and being forced to have sex with them (Jean-Pierre Armand, Dominique Aveline and one unidentified).
Finally, her boredom with her husband reaches breaking point and she leaves their breakfast table, walks out of the house and drives off to the garage where their other car is being repaired. The garage manager shows her to the ramp and explains progress on the work. Her progress through the large garage is watched by the mechanics present and as the ramp is raised, one of them approaches and looks up her skirt. She is wearing a loose but belted white dress and nothing underneath. As the manager moves away and the other mechanics approach, she raises her dress. Then the ramp is lowered and the camera stays on her body as this happens, and her erect nipples are evident. She walks away, but stops at another car, pushes down it’s bonnet and lays back on it, raising her skirt and inviting them to join her. A gang bang follows. The slow build up of this scene is very erotic, but it could certainly have been better shot and edited.
On the whole, however, a very good porn film, with a fair amount of tease and the concentration on one central female character that is now so rare in porn.
–The above review from Egafd mistakenly gives Julia Perrin as the central character, and although the Egafd credits now show Carolyn Grace instead of Julia, the review has not yet been updated to change Julia’s name to Carolyn’s, so i made the appropriate changes here.