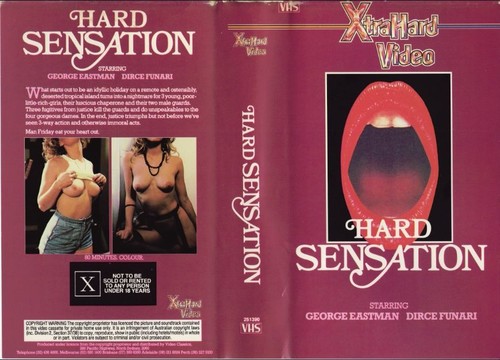 This rare entry in D’Amato’s Caribbean series concerns three high-school girls (Annj Goren, Dirce Furnari and another actress) residing in Haiti, who have been kept from their French families away from the world at large, which they feel is going to seed and may have a bad influence on them. Thus, when the three families go to Paris on business during the summer holidays, they decide that the best thing for them is that they do not accompany them and remain on a private desert island where they are to remain under the supervision of their strict schoolmistress Miss Brent (Lucía Ramírez) and two sailors who are to act as bodyguards. The three girls, for their part, are frequently engaged in playing with themselves or each other for lack of any other company. The planned summer holiday seems to go as planned until three convicts arrive on the site and eliminate the two sailors, thus leaving the island’s female inhabitants almost entirely in the hands of the vicious Beber (Mark Shannon) and his edgy homosexual accomplice (actor unknown), with only the sensible Clyde (George Eastman) offering a glimmer of hope for the captives. The women’s introduction to sex with men will be an unfortunate one and, at the end, once the whole melodrama is over, Miss Brent gives a final speech whereby the moral status quo will be restored, however spuriously.
The best moments here unfortunately come too soon in the running time. I enjoyed the establishing scene, resolved by D’Amato in two shots, of a jeep making its way among assorted cars and bicycles through bare urban locations lined by blocky edifices to the sweeping theme tune by Alessandro Alessandroni. Showing a similarly commendable simplicity, D’Amato neatly gets through another establishing scene – the two sailors setting the scene for us in a brief dialogue exchange as they load the boat in which they are to take the girls – in one single, barely mobile long shots caught from a high angle of the two men in conversation. The rest of the film – basically a “last house” scenario –is less interesting and let down by D’Amato’s lax direction.
Featured in the cast are some hardcore scenes between Ramírez and Shannon that appear to recur in many of the filmmaker’s Caribbean films. Now that we’ve mentioned Ramírez, her acting is so weak that it obviously posed a problem for her Italian dubber: should she perform at the level of the onscreen actress or at her best? She chose the latter, with the result that her efforts, conveying an intensity that Ramírez’s face does not have, almost register as an overkill. The rest of the cast is better, the Italian dubbing is top-notch and, among the female cast, Annj Goren is the best looking.
Finally, this may be a coincidence but am I right in noticing a recurring strain of generational confrontation in D’Amato’s films?