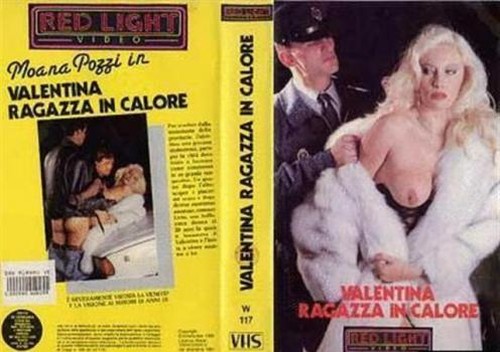 Cersosimo Something about this movie: Valentina is the girl who can’t say no. Mark Shannon, who has a plain wife (Nadine Roussial, equipped with an unflattering wig to look that way), is out jogging and sees Valentina having sex with a boyfriend in the woods. The image haunts him but also drives him to have sex with his wife. Meanwhile the story follows Valentina in her work as a shop assistant and arttist’s model, having sex with the artist and in the fitting rooms with the boss. Then she begins a lesbian affair with Guia Lauri. At a restaurant they happen to sit at an adjoining table to Mark Shannon, who strikes up an acquaintance with Valentina while her lover is out of the room. He and Valentina begin an affair. Shannon’s wife discovers this and finds Guai Lauri, who wins Valentina back by giving Shannon’s wife a makeover so that sheis attractive to Shannon again. But Valentina is incorrigible. She and Guai Lauri go to a disco together. Valentina disappears for a while and Guia Lauri finds her outside giving a blow job to a man. The end.