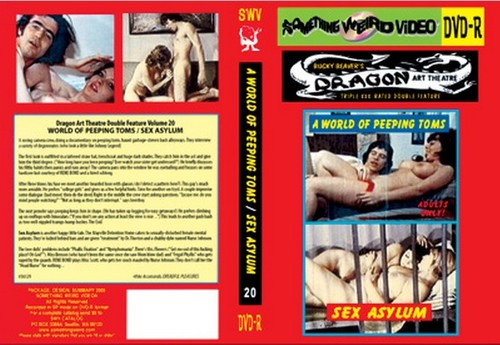 Description: A roving camera crew, doing a documentary on peeping toms, haunt garbage-strewn back alleyways. They interview a variety of degenerates (who look a little like Johnny Legend)
The first lunk is outfitted in a tattered straw hat, trenchcoat and huge dark shades. They catch him in the act and give him the third degree. (“How long have you been peeping? Ever watch your sister get undressed?”) He briefly discusses his filthy habits then panics and runs away1 The camera pans into the window he was eyeballing and focuses on some hardcore lust courtesy of Rene Bond and a hired schlong.
After Rene blows his fuse we meet another bearded loon with glasses (do I detect a pattern here?). This guy’s much more amiable. He prefers “college girls” and gives us a few helpful hints. Time for another sex tryst. A couple improvise some dialogue (bad move) then do the deed. Right in the middle the crew start asking questions. “Excuse me. do you mind people watching7” “Not as long as they don’t interrupt.” says loverboy.
The next prowler says peeping keeps him in shape. (He has taken up logging for easy getaways!) He prefers climbing up on rooftops with binoculars (“If you don’t see any action at least the view is nice …”) This leads to another gash bash as two well-nippled tramps bump bushes. The End.