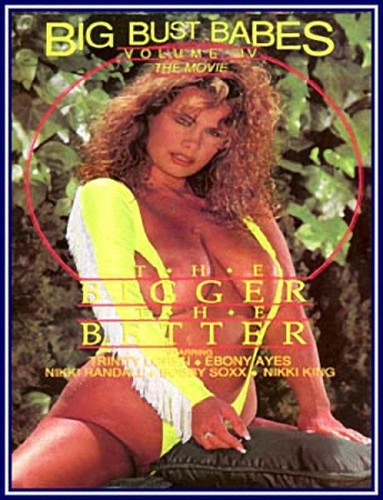 “Some of the biggest boobed babes in the biz strut their stuff in this blistering look at tantalizingly top-heavy tarts. There’s something of a plot attempted here, with the various sexual encounters strung together via some loose threads. We begin with hitchhiker Bobbie Soxx, who gets picked up by Tom Byron and taken to a seedy motel room for some scintillating sizzling. Meanwhile, Blake Palmer has hired hooker Ebony Ayes to share her massive mams with him in a jiggly jolter. Later on, Bobbie comes home and regales her shapely roommate Nikki King with her sensual story. They get so worked up that they delve into a lesbian liaison right there in the bathtub. We then get a fantasy segment in which author Nikki imagines a blistering encounter between a huge boobed bad girl and her swarthy paramour. A poolside session between the author and her poolboy keeps the heat on high. The finale finds sweet Nikki Randall inviting Blake over to her house for some fun. They engage in a frantic fling that closes the flick out in fine style. Nikki Randall was one of the most alluring women in 80s porn, and her supple, svelte little figure sure does look fantastic here. A nice choice for fans of gigantic breasts or anyone into bouncy boffing.”