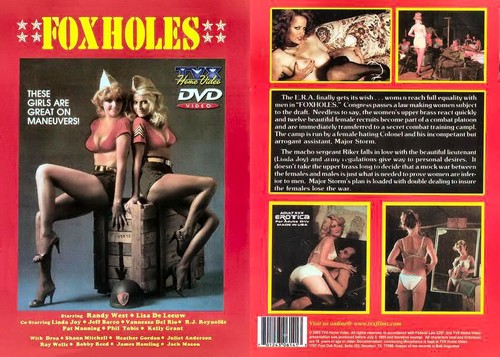 The E.R.A finally gets its whish…women reach full equality with men in ‘Foxholes’. Congress passes a law making women subject to draft. Needless to say, the women’s supper brass react quickly and twelve beautiful female recruits become part of a combat platoon and are immediately transferred to a secret combat training cap. The camp is run by a female hating Colonel and his incompetent but arrogant assistant, Major Storm.

“The macho sergeant Riker falls in love with the beautiful lieutenant (Linda Joy) and army regulations give way to personal desires. It doesn’t take the upper brass long to decide that a mock war between the females and males is just what is needed to prove women are inferior to men. Major Storm’s plan is loaded with double dealing to insure the females lose the war.