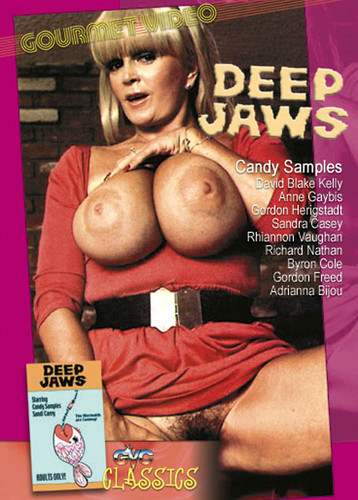 “Cross Deep Throat with Jaws, and what’ve you got? Deep Jaws, of course! Complete with ‘nympho mermaids’.
“This is the cinematic masterpiece that’s supposed to keep Uranus Productions afloat when, seemingly out of the blue, producer P.G. Dartmouth (DAVID KELLY) gets a million bucks from the government to make a movie about a U.S. – Soviet space flight. Since Uranus’ policy of only making ‘family films’ has them on the brink of bankruptcy, the company’s sex-crazed production staff decide to siphon off some of the fed’s money and, simultaneous with the space flick, toss off a quickie porno.
“Needless to say, the two films get hopelessly confused and end up blending together, thanks to drunken crew led by veteran character actor GEORGE ‘BUCK’ FLOWER (who ends the film by picking his nose), and demented director Denton (GORDON HERIGSTADT) who spends most of his time getting screwed and spanked by a pair of ebony-and-(big-titted)-ivory sex slaves.
“Complicating matters are three nubile starlets, each of whom has been promised the coveted starring role as ‘a cocksucker’: Dartmouth’s insatiable mistress Lettie Larue, ingenue Phoebe Phree (Sandi Carey with a thick southern drawl), and a French import named Monique, a.k.a. ‘Miss Deep Jaws’, who was discovered by the company’s European talent scout, a Tom Selleck clone who’s been getting laid from Stockholm to Paris.
“Complicating matters further is Dartmouth’s lollipop-sucking son, Junior (Richard Nathan), who wants to be a star in sex films, and Dartmouth’s seemingly puritanical wife, Henrietta (none other than Miss Mammary herself, CANDY SAMPLES!), who secretly ‘earned’ Uranus the million bucks by getting kinky with state department bigwig Hans Pissinger, and doesn’t know that the space film is now a porno film.
“Highlights of this zany sexathon include underwater photography of the ‘mermaids’ demonstrating their ‘deep jaws’ technique, Miss Samples nursing Pissinger with one of her humongous hooters, and Miss Carey doing a soft-shoe tap dance as a prelude to softcore sex. Screenplay by WALT DAVIS (director of Evil Come Evil Go and The Danish Connection) and produced by the Desi Arnaz of sexploitation, MANUEL S.CONDE.”