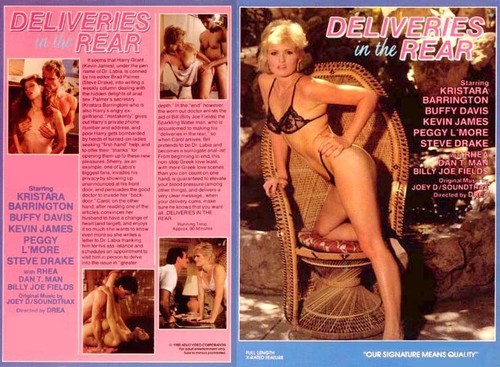 The fun starts when struggling writer Kevin James is convinced by his editor to start writing a weekly column dealing with the hidden delights of anal sex. Kevin starts dealing out sexy advice under the pen name Dr. Labia, but things take a turn for the sexy when his editor’s sassy secretary starts giving out his phone number! Poor Kevin soon gets bombarded by herds of turned-on ladies seeking ‘first-hand’ help with their back door desires. One sultry siren shows up at his front door unannounced, disturbing his privacy with her needy naughtiness. Another shapely siren comes by to thank him after a wanton night with her husband, in which he finally treated her to some back door boffing. This vivacious vixen wants to thank Kevin by giving him some of the same! It’s all too much for him — especially since he wants to spend his time writing the Great American Novel. In the end, Kevin enlists the help of the local water delivery guy, convincing him to be the ‘face’ of Dr. Labia. It’s a silly, sometimes slippery ride to the far reaches of eroticism as Kevin and pals engage in some of the steamiest, sexiest rear entry raunch we’ve seen. Filled with some of the 80s’ most enticing starlets, this is one Delivery you’ll be happy to accept