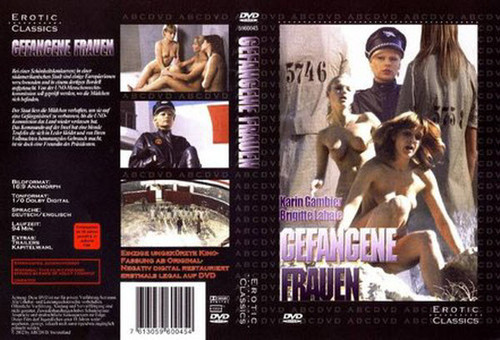 Description:GEFANGENE FRAUEN (better known in the US as ISLAND WOMEN) is a fantastic WIP film directed by Erwin Dietrich with an amazing cast the includes Brigitte Lahaie, Karine Gambier, France Lomay, Nadine Pascal, Krista Free and Eric Falk. In a South American country the ‘El President; decides he has to hide the prostitutes who work in his brothels. His plaything, Karine Gambier suggests he had the girls ‘arrested’ and brought to an island prison where she plays the warden who must keep the girls in line. There the prisoners are subjected to the usual women-in-prison disciplinary actions.

There’s an abundance of nudity in this fine exploitation film from Erwin Dietrich that has a little bit of everything for fans of Euro-Trash. How can you go wrong with a cast that includes Karine Gambier, Brigitte Lahaie and France Lomay? This DVD has been released under the supervision of Erwin Dietrich so you are guaranteed of the highest possible quality.