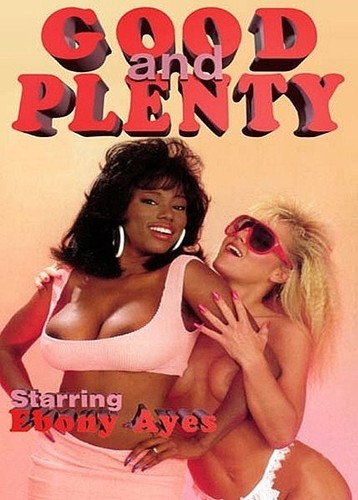 Cast: Ebony Ayes, Nikki King, Nikki Good, Patty Plenty, Billy Dee, Frank James, Ron Jeremy
There’s plenty of eye candy in store for anyone who ventures into this top-heavy collection of carnal clinches. Filled to the brim with super-busty young women and their awesome up-top assets, ‘Good and Plenty’
delivers the goods for fans of breasty beauties. The story follows the travels of a magical silver bowl that transports the guy or gal of your dreams intoyour arms whenever you rub it. The action begins with buxom black beauty Ebony Ayes, who conjures up Frank James while watching a porn flick and engages him in a frantic interracial dust-up. Frank can’t resist stealing the bowl from her, and when he rubs it he finds himself confronted with the massive mams of Medina. She shares her mouthwatering mounds with him in another steamy segment. Billy Dee’s the next one to take the bowl, and he makes luscious Nancy Good appear before him. Even though she was just having sex with Ron Jeremy, the sudden switch doesn’t slot Nancy down one little bit. The flick wends its way towards an explosive finale, with Medina and Patty Plenty getting down and dirty in a sensual lesbian liaison. ‘Good and Plenty’ is sure to be one of the sweetest items in any hardcore collection!