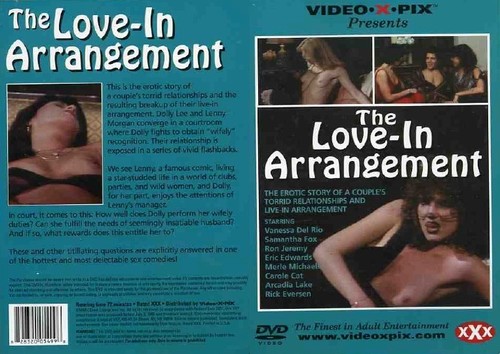 As the sole directorial credit of one “Charles Larkin” who – judging by the degree of professionalism on display – just might be another Hollywood player slumming it, this f*ck film farce stands head and shoulders above many similar attempts at carnal comedy. It offers a solid opportunity for its central pair of frequently underrated performers to shine and it’s got a cute premise to boot. Aspiring actress Dolly (marvellous Merle Michaels) has put her fledgling career on hold to support her stand-up comedian boyfriend Lenny, which provides a rare lead for good-looking Rick Iverson, usually found in bit parts in movies like Ron Sullivan’s excellent BUDDING OF BRIE, incidentally the very first porno flick I ever saw. Now that he’s a big success and plans to break up with her over a pair of semen-encrusted panties that have been brought to his attention by his sleazy best friend Ron Jeremy, Dolly proceeds to sue him in a headline-engendering palimony trial to the tune of a million bucks. Suffice it to say that both parties have a decidedly different take on what caused their relationship to deteriorate. Heck, they can’t even agree on how they first met, Dolly alternately appearing as a kindhearted, starstruck small town girl (her version) or as a wanton gold-digger (his). There’s a funny elaborate sequence involving a big time movie producer, played in witty deadpan fashion by the always dependable Eric Edwards, who’s decidedly more interested in Dolly’s physical charms than any thespian prowess Lenny might possess. The late Arcadia Lake, Edwards’ then real life girlfriend who reportedly passed away from a drug overdose, shows unexpected comedic flair as the great man’s seen it all secretary who knows her employer’s way with a willing starlet all too well. The girl playing his assistant who meanwhile consoles Lenny in the kitchen is pretty Patty Boyd who was the naive hippie chick in Armand Weston’s classic TAKE-OFF. The film’s lowlight on the other hand consists of a weird party of so-called cat lovers, only in this case that means freaks who like to dress up and act like felines, a sequence so misguided it would be insufferable if it weren’t for the life-saving comic antics of longtime friends and lovers Samantha Fox and Bobby Astyr going for broke. Unfortunately, their considerable talent’s not the only waste this movie can lay questionable claim to. Vivacious Vanessa Del Rio and bug-eyed beauty Christie Ford only appear as part of group sex scenes in differing versions of how Dolly and Lenny got to know each other. At least, Vanessa provides a feverish if fleeting double penetration along the way. Kandi Barbour, she of the protruding nipples, pops in ‘n’ out for an under two minutes bathtub boff as one of Lenny’s “occupational hazard” conquests. Small wonder then that the movie still manages to overcome such shameful spillage. This is all down to some sparkling writing, especially in the courtroom scenes, and the tremendous chemistry between the two stars. Michaels raised the dizzy blonde shtick to an art form in fine films like Larry Revene’s SIZZLE and Ron Sullivan’s A GIRL’S BEST FRIEND yet was too often considered merely a one note supporting strumpet, an assumption proved wrong by her delightful work here. Iverson turns out to be even more of a UFO, if anything, his charismatic performance and studly prowess apparently cementing burgeoning major league status that for some unfathomable reason never came to pass.