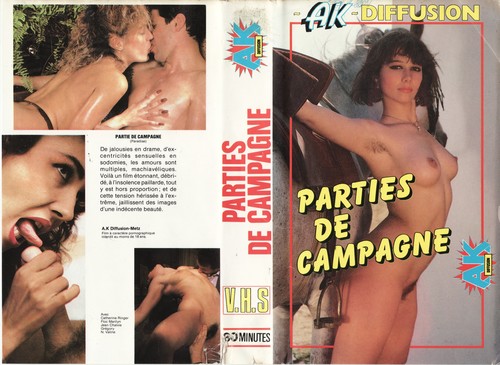 aka Sweet Paradise
aka Parties De Campagne
aka Paradise

Description:
An accurately directed and well-acted movie about three lesbian friends who live in isolation somewhere in the French countryside until their tranquility gets disturbed by unwelcome visitors. But despite growing tensions and jealousy the whole situation keeps calm until the visitors vanish again.
Olga, Sarah and Mireille live a peaceful life on their own without sorrows. The only guy they need is their dumb servant, Lucien, who prepares the meals and does the shopping. Mireille, a fortune teller, is the first one who recognizes that things are going to change. She predicts that two guys and one woman will enter their lives soon and that’s exactly what’s going to happen in the following 70 minutes.
While Olga and Sarah share their passionate feelings, Mireille imagines having sex with one of these guys, named Frederique.
On the next day the story develops as Lucien meets a couple whose car has broken down. Ignoring his instructions he leads Florence and Pascal to the secluded house. Though our three friends are not very enthusiastic they finally allow the couple to stay for the night. Sex then begins between Florence and Mireille. On the following days Pascal seduces the girls one after another before Frederique enters the scene. He starts an affair with Pascal’s girlfriend Florence.
After a horse-riding accident he also comforts Mireille in a barn and has a hot threesome with Pascal and Florence in the open boot of a small Renault 5.
Before things can escalate further Pascal, Frederique and Florence say good bye on the next day.
The sex scenes are well blended with the overall plot and fit perfectly into the rest of the movie. They could last longer and vary a bit but sweet Julia Perrin (Mireille) has four (!) tasteful scenes and Catherine Ringer’s threesome is superb.