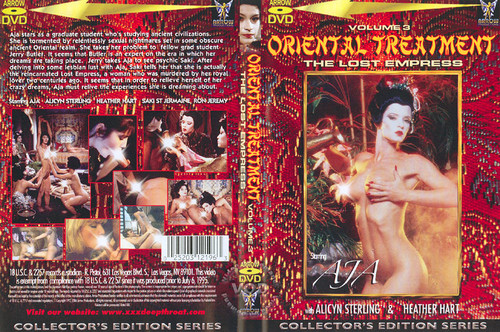 A complicated storyline doesn’t get in the way of the action in this steamy 1992 feature. Aja stars as a graduate student who is studying ancient civilizations. She is tormented by relentlessly sexual nightmares set in some obscure ancient Oriental realm. She takes her problem to Professor Wayne Summers, who sends her to see fellow grad student Jerry Butler. It seems that Butler is an expert on the era in which her dreams are taking place. While Summers relaxes with student Alicyn Sterling in a heated romp, Jerry takes Aja to see psychic Saki. After delving into some lesbian lust with Aja, Saki tells her that she is actually the reincarnated Lost Empress, a woman who was murdered by her royal lover two centuries ago. It seems that in order to relieve herself of her crazy dreams, Aja must relive the experiences she is dreaming about. Or something. Ron Jeremy then joins the story as a hypnotist who is not above taking advantage of his female clients while they are under. The story is indeed complex, but there is always a steamy sex scene right around the corner. Highlights include a frantic Aja/Jerry coupling, and a torrid tryst between Ron and subject Heather Hart. While it has nothing to do with the preceding two editions of the series, this one stands on its own as a top-notch hardcore feature in every way.