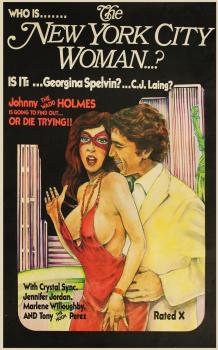 Description:  It begins with John C. dictating his memoirs. He’s on a terrace of a penthouse in New York City. He has just left California and wild orgies and has yet to find a deep throat that can swallow his enormous schlong. His friend Jeffrey Hurst is butler to C.J. Laing, a very rich, insatiable nymphomaniac. Hurst has written to John about C.J. But before the classic encounter between the two, there’s a lot of hanky panky in a hospital. Hurst, an M.D. and only a part-time butler, has invented a sex machine to restore male virility. It’s being tested on Eric Edwards. Eric is examined by a lesbian nurse, Georgina Spelvin, who finds that Eric doesna € ™ t need the machine. John C. is screwing all the nurses he can put his dick into. Finally he gets to meet C.J. but not until she’s proved her oral abilities with Tony Perez, whose prick looks even longer and bigger than John’s! Skinny as she is, C.J. Laing goes down on his wanger, right down to his balls. She can do it not just once, but over and over again on the biggest one of them all.