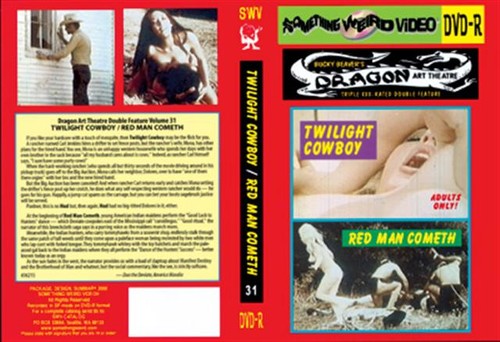 Description: If you like your hardcore with a touch of mesquite, then Twilight Cowboy may be the flick for you.
A rancher named Carl Jenkins hires a drifter to set fence posts, but the rancher’s wife, Mona, has other plans for the hired hand. You see, Mona is an unhappy western housewife who spends her days with her own brother in the sack because “all my husband cares about is cows.” Indeed, as rancher Carl himself says, “I sure have some purty cows!”
When the hard-working rancher (who spends all but thirty seconds of the movie driving around in his pickup truck) goes off to the Big Auction, Mona calls her neighbor, Dolores, over to have “one of them there orgies” with her bro and the new hired hand.
But the Big Auction has been canceled! And when rancher Carl returns early and catches Mona setting the drifter’s fence post up her crotch, he does what any self-respecting western rancher would do — he goes for his gun. Happily, a jump cut spares us the carnage, but you can bet your boots sagebrush justice will be served.
Pardner, this is no Hud but, then again, Hud had no big-titted Dolores in it, either.