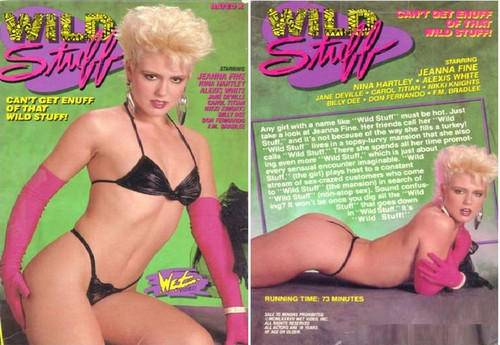 Wild Stuff Description: “This wall-to-wall collection of mostly interracial couplings stars a youthful Jeanna Fine as the owner of an unhinged sex club called Wild Stuff. Jeanna sports a mane of short, platinum blonde hair that gives away her punky nature, and throws herself into the proceedings with the ardor of a newcomer who just can’t get enough. We begin with a threesome between tightbodied Nina Hartley, Alexis White and Don Fernando. All three get their groove on, and then we move on to a searing group grope between F.M. Bradley, Carol Titian and another tasty young tart. F.M. shows off his tireless nature when he comes right back for more in the next clip, this time joining a luscious young strumpet for some one-on-one fun. A big group session ends the feature, with Alexis and Jeanna finding themselves in the midst of a wild pile-up. Those who like interracial action and lean, 80s style vixens will surely find lots to lust after throughout this one. It’s a real throwback, an old school treat that still holds up after all these years.”