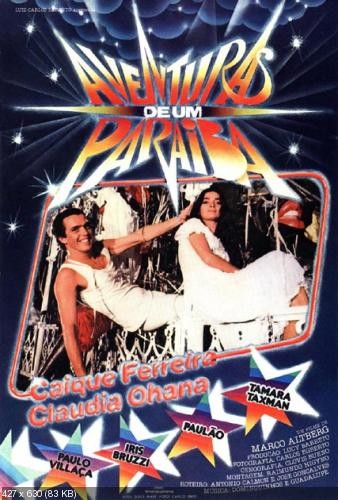 Starring: Caique Ferreira, Paulao, Claudia Ohana, Tamara Taxman, Paulo Villaca, Lourival Felix, Catarina Abdala, Ovidio Abreu, Monique Alves, Marcia Brito, Iris Bruzzi, Chacrinha, Henrique Costa, Cecilia Moreira de Souza, Ligia Diniz, Chico Diaz, Haylton Farias
Description: The poor Ze Branco travels from Paraiba and arrives in Rio de Janeiro to live with his friend Ze Preto, who is a factory’s worker, in a room in a slum expecting to win and have a better life in Rio. Ze gets temporary work; begs in front of a church; sells ice-cream on the beach; sings in a TV show; but life is not easy in the big city. Meanwhile he saves the blind Branca while crossing the street and they have a crush on each other. But Branca is courted by the dangerous former police detective Miguel Matoso. When Preto is fired from his job, he becomes a criminal and moves to a hideout. Meanwhile, Ze has an affair with photographer Debora, but he does not forget Branca. During the Carnival, Ze sees Branca with Miguel and he kidnaps the girl, and the result is tragic.