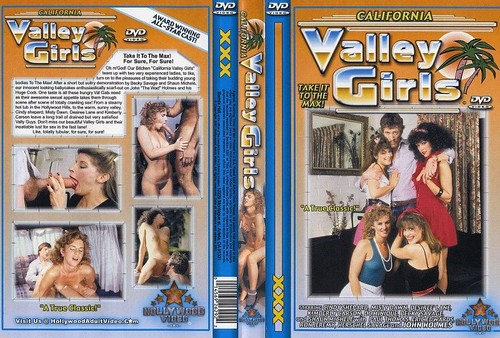 (from the back of the DVD box):
This fast-paced romp from the early 80s features some of the most alluring women of the day in some seriously sensual shenanigans. The plot revolves around a scheme cooked up by totally tubular Valley Girls Shaun Michelle and Becky Savage. They realize that there are a lot of older Valley men who will pay top dollar to spend some sensual time in the arms of a fresh-faced young cutie. They go out and recruit a foursome of fiery foxes, then set out to turn the gals into rip-roaring sex machines. One of the flick’s best scenes features John Holmes as the willing subject during a lesson in oral sex. Shaun shows the gals how it’s done, and then each of them tries out her new-found skills on the legendary stud. Once the ladies have learned their lascivious lessons, it’s time for them to hit the streets and start plying their tawdry trade. Among the hottest trysts is a steamy hot tub session between delectable Kimberly Carson and Eric Edwards. Another great scene finds Dominique hiring luscious Desiree Lane as a present for her hubby Herschel Savage, who definitely appreciates his gift. ‘California Valley Girls’ is a fiery frolic that delivers the go-go goods to the max.

(from the back of the VHS box):
Like, these girls take it to the max. Oh m’God! These bitchin’ California Valley Girls team up with two very experienced ladies to, like, turn on to the pleasures of taking their budding young bodies to the max. After a short but sultry demonstration, our innocent looking babycakes enthusiastically scarf-out on John “The Wad” Holmes and his huge cock. One taste is all these hungry ValGals need as their awesome sexual appetite takes them through scene after scene of totally cranking sex. From a steamy hot tub in the Hollywood Hills, to the warm, sunny valley, these girls leave a long trail of drained but very satisfied valley guys. Don’t miss our beautiful valley girls and their insatiable lust for sex in the fast lane. Totally tubular, for sure, for sure!