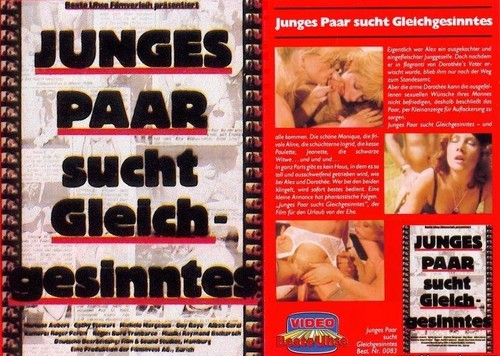 Marianne Aubert and Guy Royer are an unmarried swinging couple. They seduce every female or male they encounter, it seems. We seem them reading the paper (presumably the personal ads) while having sex.
Cathy Stewart arrives to do some typing for Guy. He seduces her, but runs off in disgust when Marianne tries to join in. The next typist, Laura Clair has no such inhibitions, however.
Next Guy arrives home to find Marianne talking to a friend (Obaya Roberts) while her husband (Jean-Pierre Armand) fixes their car in the street. The friend beckons him up to the apartment for a swinging session and he arrives to find Guy having sex with his wife. A foursome soon develops.
Then Guy and Marianne get married and go for their honeymoon to a hotel where they know that the owner (Alban Ceray) lets other guests spy on honeymoon couples through a two-way mirror, while he and the maid (XNK0673) peep through the keyhole.
The maid and Alban join the peeping guests and the maid takes them all on and then Alban and the maid join Guy and Marianne while the male guests watch.
On the drive home their car breaks down and it is not immediately fixable; so the garage owner invites them to stay with him and his wife (XNK0674). Another foursome follows.
Back home a sex-aids saleswoman (Cathy Dupray) calls and Guy persuades her to demonstrate the efficacy of the lube she is selling on her own anus – with his help of course. (Or maybe she was just selling butter in a tube. The label reads ‘beurre laitier’- dairy butter.)
Then it’s Marianne’s turn again. She persuades a cop not to give her a parking ticket in traditional manner.
Then they both go to meet widow Nicole Segaud and have a threesome in a field adjoining the cemetery where her husband is buried.
Finally business caller Hubert Géral is inveigled into a threesome which a second business caller André Kay makes a foursome. Marianne takes a DP and facial.