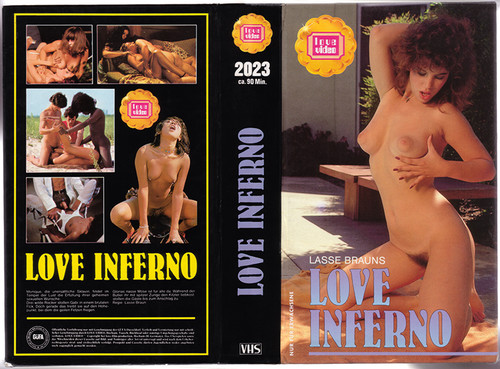 Egafd and the film’s end credits list Constanze Hill, Elfie Becker, Giselle Ferrard, and Martha Schneider – but these names are not linked to any other films at Egafd or IMDb.

Description:
Love Inferno is the story of a smouldering family conflict which ends in disaster.

Dominique and Monique are brother and sister. Their father Alfons has died recently and their mother, Lena, has married Richard, an unsympathic older guy whom they dislike. Richard’s affair with Belinda, the family’s maid does not make things easier. Lena, who’s infected with class snobbery, doesn’t tolerate her son’s girlfriend Gaby. This is definitely not a harmonious family life.

The story begins with Alfons’s funeral. In the next scene Dominique and Gaby are standing on a balcony. Through her binoculars she watches the older neighbor having sex with his blonde secretary. Meanwhile in the living-room, Richard phones Gerard, an estate agent and golf teacher of his stepdaughter. He wants to sell the house.

When blonde Belinda arrives he unbuttons her blouse and caresses her breasts. But he can’t go further because Lena and Monique suddenly arrive at home. When Lena meets Gaby she asks her to leave the house immediately. At lunch the strained relations between the family members become more and more evident.

Dominique meets Gaby at the sand dunes. But they are not alone. Jealous Andy, her former lover and two of his friends trap them. While Dominique is knocked down Gaby has sex with Andy. When he’s finished the other two guys plug her holes too.

Dominique awakens in the hospital with his sister sitting by his bed. She slides her hand under the blanket where everything seems to be allright. When she’s gone Dominique becomes active. Through a ventilating grid in his room he observes the doctor ‘examaning’ the black nurse. Suddenly his mother arrives accompanied by Gloria who’s a teacher of astrology. He pretends not to remember her but we have seen him baring and touching her ass cheeks at the cemetery. You know .. mothers can be so curious!

Meanwhile Monique gets private lessons from Samantha, a history schoolmistress, who turns out to be an expert in pussy licking. But we also learn from her that ‘love inferno’ is not only a stupid movie title, but an historical sex technique invented by A. .. (you won’t believe it) Education is suddenly disturbed by the butler who’s a ‘client’ begging for sexual humiliation. No problem! When Mr. and Mrs Smith arrive she gives him a fresh golden shower which is really delicious.

Meanwhile Dominique visits Gloria. She has just given a lecture to her students and now focuses all her spiritual and sexual energy on him. Even Lin the curious cutie watching them can learn a lot from her.

Outdoors Gerard teaches Monique the golf swing but he’s not only interested in golf holes. He seems to be a lousy lover so she wants more … much more! Bondage sex!

Meanwhile Lena has a breakdown but the two mechanics are much more interested in her legs than in repairing her car. Monique and Dominique find the deserted car on the side of the road. In the very last scene they discover her but the spectators don’t see her. Just her moaning can be heard.