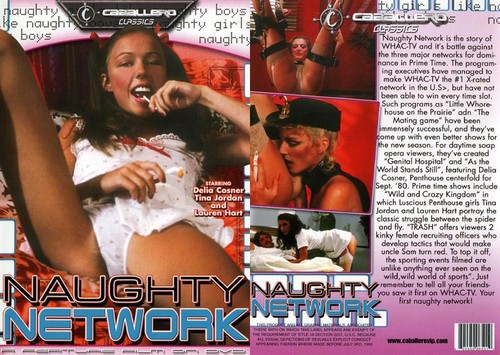 Description: Naughty Network is the story of WHAC-TV and it’s battle against the three major networks for dominance in Prime Time. The programming executives have managed to make WHAC-TV the #1 X-rated network in the U.S., but have not been able to win every time slot. Such programs as “Little Whorehouse on the Prairie” and “The Mating Game” have been immensely successful, and they’ve come up with even better shows for the new season. For daytime soap opera viewers, they’ve created “Genital Hospital” and “As The World Stands Still”. Prime Time shows include “Wild and Crazy Kingdom”, in which Luscious Penthouse girls Tina Jordan and Lauren Hart portray the classic struggle between the spider and fly. “Trash” offers viewers two kinky female recruiting officers who develop tactics that would make uncle Sam turn red. To top it off, the sporting events filmed are unlike anything ever seen on the “Wild, Wild, World of Sports”. Just remember to tell all your friends that you saw it first on WHAC-TV. Your first naughty network!