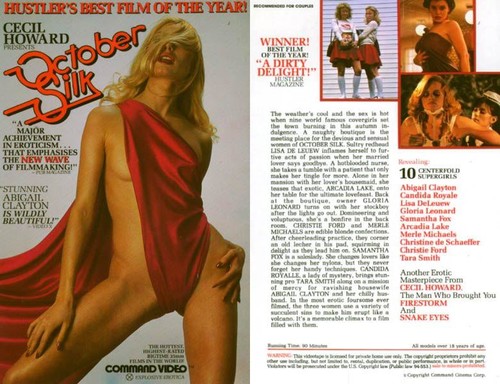 The weather is cool and the sex is hot when nine world famous cover girls set the town burning in this autumn indulgence. A naughty boutique is the meeting place for the devious and sensual women of OCTOBER SILK.

Sultry redhead Lisa DeLeeuw inflames herself to furtive acts of passion when her married lover says goodbye. A hot blooded nurse, she takes a tumble with a patient that only makes her tingle for more. Alone in her mansion with her lover’s housemaid, she teases that exotic, Arcadia Lake, onto her table for the ultimate lover feast.

Back at the boutique, owner Gloria Leonard turns on with her stock boy after the lights go out. Domineering and voluptuous, she’s a bone fire in the back room. Christie Ford and Merle Michaels are edible blonde confections. After cheerleading practice, they corner an old lecher in his pad, squirming in delight as they lead him on.