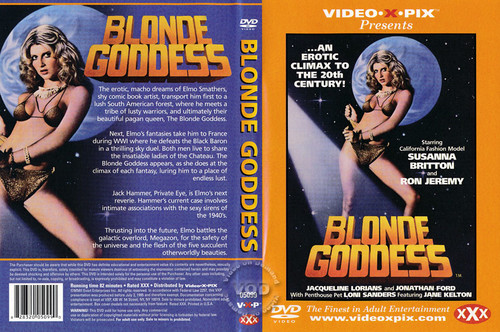 Adventurer Louisiana Smith comes to the rescue of Jungle Jane as she is about to be sacrificed by lusty Indians in the Yucatan, in 1936; suddenly, we cut to the offices of Marble Comics, where comic artist-nerd Elmo Smathers is discovered to have been fantasizing, in Walter Mitty fashion, as his boss gives him a talking-to; his depravities are under fire by a sexy Comics Code representative. As the latter stuffed shirt loosens up, eventually to throw herself at the boss of the comic book company, Elmo fantasizes over other scenarios, including himself as Johnny Ace, WWI ace pilot, battling the German Black Baron; as Private Eye Jack Hammer; and as a heroic construction worker who is transported to a spaceship by the galactic overlord, Megazon (along with a beautiful and innocently-bystanding earthling). The “Blonde Goddess” makes an appearance in each fantasy.